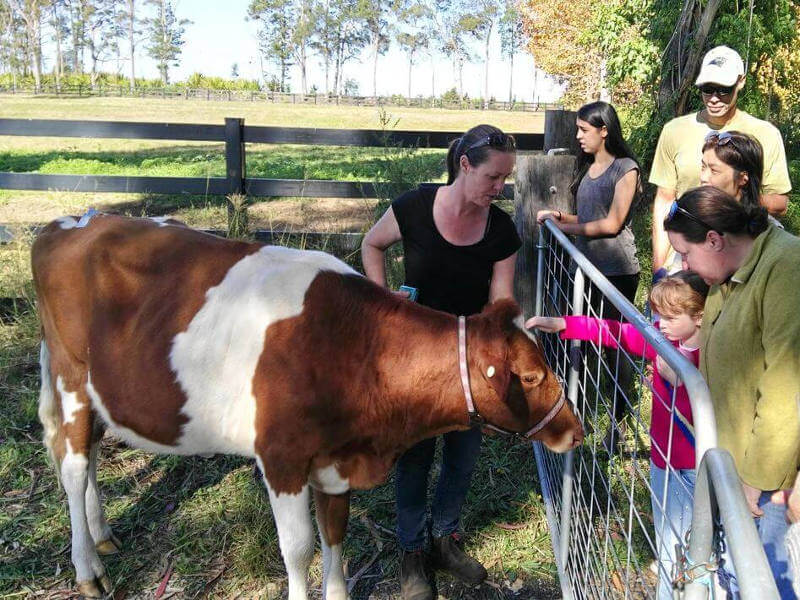 >> MEG MCGOWAN: Good morning how are you?

>> SCOTT: Going well, Meg. Why should we save our farming land on the Central Coast?

People often say to me: “Look, I don’t have time to garden”.

“I’m not interested in growing things. What’s permaculture got to do with me?”

And we point out to people that permaculture is not about self-sufficiency, that idea that you’re going to stay on your own little block and produce all your own milk and eggs and everything else.

I actually call that selfish sufficiency.

Because your neighbour might be going hungry and you’re doing just fine and in fact what we’re all about is building these connected and resilient communities.

So if you don’t have the time or the space or the energy to grow your own food, sourcing it locally is really important because that’s money that you’re putting back into your local economy.

So if you think about food that’s grown somewhere in the United States, by the time it gets on a plane, gets on a truck, sits in the supermarket for a week you can imagine what the nutrition in that food’s like.

>> SCOTT: There’s lots of that too isn’t there, you know lots of American stuff coming in.

The navels from up on the plateau at the moment are just fantastic And they’re so much better than those early season ones in the supermarkets that they gas, you know.

They pick them too early. They’re perfect right now.

You’ve got to wait for the season, haven’t you.

Going to the farmers markets perhaps?

that you can support local farmers.

You can find them directly.

But there’s a great group called The Food Integrity Group.

And that’s a group of volunteers.

And you can join that group and order your box of locally sourced organic food.

So that’s R-E-K-O and the Reko ring farmers can actually connect directly with you. So when they’ve got things available, they put them up, you order directly from the farmer

and then they organize the collection point where you can go and get them.

>> MEG: Sure so the Reko ring. R-E-K-O. And Food Integrity Group or we usually just shorten it to FIG.

So that Food Integrity Group is just a terrific group of people.

The other thing we’ve got are some wonderful local farms

And Full Circle are actually … they’ve recently bought the butchery at East Gosford. So they’re going to be able to sell directly to the public out of their East Gosford butchery.

>> SCOTT: We’ve got those organic square meters or whatever they call them.

Been up there with Virginia and the crew at some of those fun. They do a wonderful job.

Hey this is terrific stuff so we’ll check out FIG and Reko and look after our Farmers. Hopefully they can get the farm gate Trail thing going and extend the Hawkesbury Trail.

Because we’ve got five million people hungry for fresh nutrient-laden food and we’ve got it here.

We just need to connect them. Our farmers should be going gangbusters through that and cut out the middle-man.

It’s not you know those food miles and all that stuff, it’s just the way to go, isn’t it.

So those sites sound great, thank you very much for that

>> SCOTT: Permaculture Central Coast Meg McGowan then on why we should look after our local farmers.

Because a lot of push west of the freeway too to start to develop all of that land. But what do we eat? I know the poor old farmers are doing it pretty tough.

But we’ve got to get in support them, haven’t we.

So FIG sounds like a good page and the Reko page as well. You can jump on there.